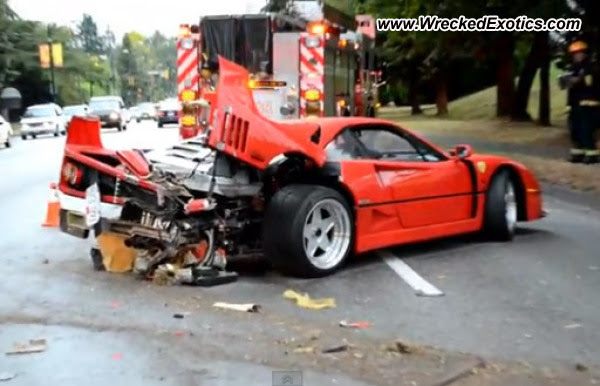 This is downright painful to watch. Video of Almost Everything's Wreck of the Day: a Ferrari F40. Created to celebrate the Ferrari company's 40th anniversary and designed to be the world's greatest supercar. Only 1,315 were made from 1987 to 1992. Buyers reportedly paid anywhere from US $400,000 to US $1,600,000 and the cars still trade for that much today. WreckedExotics.com reports that the Ferrari was returning from a car show in Vancouver, Canada when the driver lost control in the rain and hit a pole. The car is valuable enough that it will probably be rebuilt but the video shows that there is a lot of work that will need to be done.

Email ThisBlogThis!Share to TwitterShare to FacebookShare to Pinterest
Posted by Almost Everything Auto Body Repair & Paint at 7:31:00 PM