Here is my latest acquisition, a 1964 Ford Thunderbird. I bought from Nicolas Perez who owns Sunshine Auto Detailing on Mission Blvd. in Hayward. He put it up for sale many months ago when I didn't have any money to buy a car. I know people will think I'm crazy but I think that the 1964 Thunderbird is the most beautiful car ever produced in the USA. I've lusted after it since I was a little kid--and it is as old as I am so this has been a while in coming. 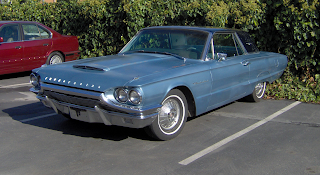 The economy has been in the toilet for the past 2 years and Nicolas' beautiful car never sold. I continued to see it parked behind his business for months and I finally broke down. Nick wouldn't take a dime less than his asking price. So I eventually paid him what he wanted--more than I could afford and less than I think it was worth so all-in-all an okay deal for both of us. 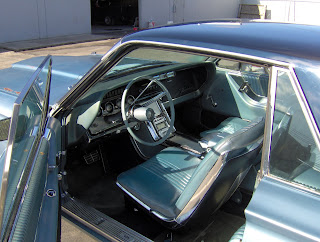 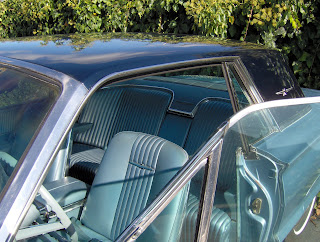 The car looks like it was purchased by an elderly couple then put in a nice garage & forgotten for a few decades. The interior looks almost new--it doesn't even show the hardening & shrinkage that I would expect on the seats but they are worn just enough to show that they are original. The engine starts eagerly and the car drives well. 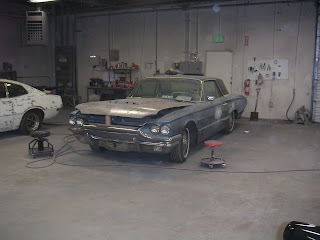 It needed paint so we brought it into the shop for some exterior freshening. Then we got busy. So it has been sitting, naked (bare metal) in a corner for weeks. I only got to drive it a couple of times before the crew tore into it. Everyone here wants it to be a show car but this is frustrating! The good news has been that the original sheet metal is very straight. The bad news was that the original paint was microchecked (in technical terms, the paint was "toast") so everything has to get stripped down to bare metal. 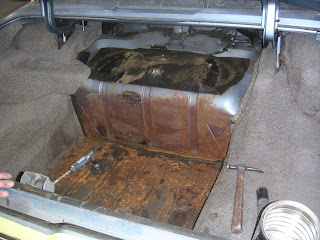 The trunk looked like it had never been used. The original tire & liners were virtually untouched. . . but it smelled musty and an old parts catalog sitting at the bottom of the trunk was wet. . . we found rust. Lots of rust. 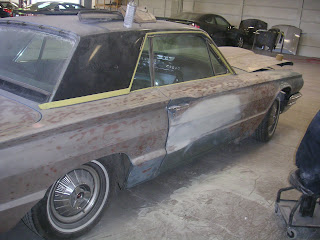 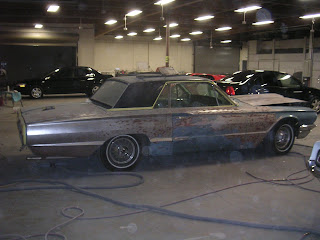 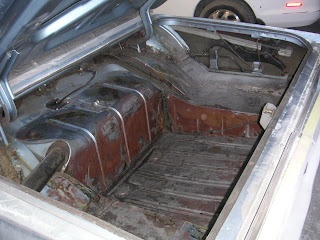 Fortunately, the rust in the trunk has turned-out to be just on the surface. It cleaned-up fairly easily. 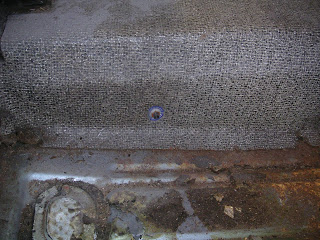 Who can tell us what this is? We can tell it is an air inflator connector and it is on the driver's side wheel well in the trunk. We haven't done any research into it. It looks like it connects to the rear suspension. Is this an early self-leveling system? Was it stock?!

More photos to come after she's painted.
Email ThisBlogThis!Share to TwitterShare to FacebookShare to Pinterest
Posted by Almost Everything Auto Body Repair & Paint at 6:13:00 PM