Almost Everything's very own Cody Thompson took fast-time and led the final 16 laps to win the prestigious Fall Classic for NASCAR Modifieds on October 12, 2012 at Roseville, California's All American Speedway.  Friday's win is Thompson's second of 2012 in a season that saw him finish fourth in the NASCAR California State points.

"I was happy to finish off the season on a high note with all the hardship we have come across," Thompson said, referring to a blown engine and mechanical issues earlier in the season."This win was a much needed win for CTR and Eclipse Racing."


Thompson started the 50 lap contest in sixth position. The 19 year-old jumped into third position by lap three. One lap later, Thompson passed Keegan Walmer to take over second. Thompson's focus shifted to Eclipse Racing teammate Jay Linstroth. Thompson chased down Linstroth and after looking high and low for several laps, Thompson completed the pass for the lead on lap 34. The final 16 laps of the race saw Thompson fend off a late charge from Walmer to take a .325 second victory at the checkered flag. 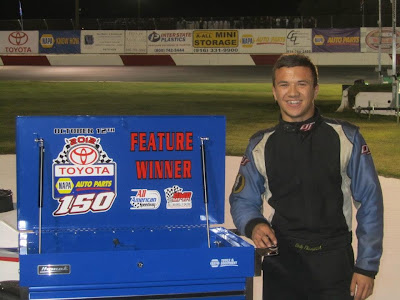 Despite a season with some bad luck, Thompson has accumulated ten top-fives and 14 top-tens in 22 starts.  His other victory this season came on June 30 at Stockton 99 Speedway.

With four Modified wins and three USAC Ford Focus wins over the last three seasons, Thompson's focus will turn to Late Model competition. The October 19-20, 2012 Stockton 99 Speedway "Fall Classic" for Late Models will be Thompson's debut and is scheduled for 100 laps. "I'm excited to finally race a Late Model and have my debut at the Stockton Open Show," Thompson said.  "I look forward to the challenge and competition in this division."


Email ThisBlogThis!Share to TwitterShare to FacebookShare to Pinterest
Posted by Almost Everything Auto Body Repair & Paint at 4:40:00 PM